Everything You Need to Know About Creating Awesome Twitter Bios 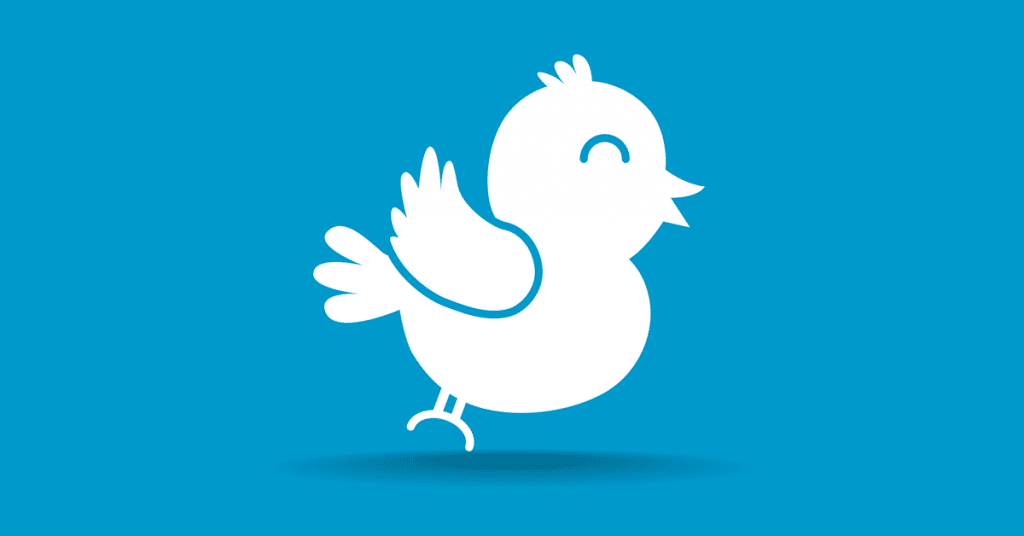 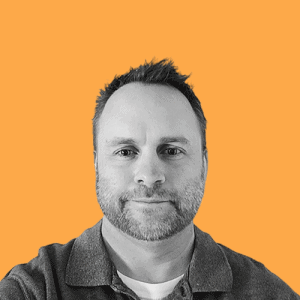 When you get a new follower on Twitter or perhaps are looking for new users to follow, what’s one of the first things you do when you go to a profile?

Sure, it only takes a few seconds to skim through the allotted 160 characters, but when you are done you’ll have a pretty good idea of what that person is about.

Or at least you should.

But unfortunately, one of the most overlooked parts when setting up a Twitter account is the Twitter bio section. For most, they haphazardly throw something together and call it a day. In fact, I doubt it’s sitting really high on the list of your social media strategy.

But, did you know that your Twitter bio is important for several reasons?

For example, if you are using Twitter for influencer outreach, chances are people are going to take a peek at your Twitter profile.

And if you don’t seriously take consideration in what goes into your bio, you won’t be getting the most out of it.

As I mentioned, your Twitter bio is one of the first things a user will notice when looking at your profile. Therefore, you need to get it right.

But how do you “get it right”?

And what does that even mean?

For starters, you’ll need to set a goal for what you want to accomplish with your Twitter bio.

I don’t think you need just one goal for your bio. And it makes sense to have multiple goals for your Twitter bio. 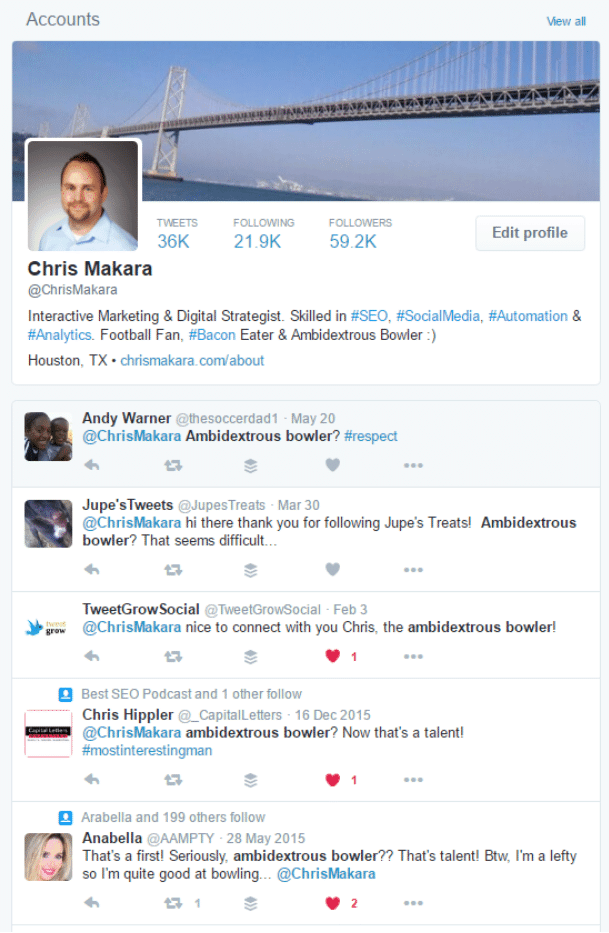 Was it perfect? Far from it.

But it did accomplish several goals for me:

And it has worked great as you can see from the above screen shot. My clever Twitter bio worked well at striking up conversations (pun intended) as seen from the reference to being an “Ambidextrous Bowler.”

I have been using this awesome Twitter bio for a few years.

But it’s time for a refresh.

So I took a step back to decide what I hope to accomplish with my bio as well as the key points I need to make with it.

In the previous section, I touched on what I felt were things I needed to have in my bio.

And for the most part, they all still hold true.

However, I want these to be “must-have” elements of my Twitter bio:

So let’s break down each of these and why I feel they are important.

I look at this as setting expectations of what someone can expect most of my tweets to be around topically. With this alignment, new or potential Twitter followers won’t be misled or disappointed in what you share. And if you use social media automation to share content, it’s best to set forth the type of content you will be sharing.

If they don’t have the same or similar interests, then they more than likely won’t connect with your account (which is fine).

This is somewhat similar to to the first point. However, by specifically calling out what you are good at your followers will know what areas they can turn to you for help and insight.

Like the first two points, this further emphasizes your areas and skills of interest. By turning select skills and interests into hashtags, your account can take advantage of potential searches for particular topics.

For me, this one is key in that I want to start being more active in promoting Bulkly as I get closer to launch. For you, perhaps you manage additional Twitter accounts or have your own side-hustle project you are working on. Cross promoting it in your Twitter bio is a great way to introduce it to your followers.

Include a Personal Interest In Your Bio For Twitter

We aren’t all about work, are we? With that said, I wanted to be sure to add something that has nothing to do with my work so that followers can get a small glimpse into what interests (or talents) I have outside of work.

ICYMI: You can now use the full range of emoji to spice up your name and bio on your Twitter profile! 📝 🙌

While, I haven’t fully jumped on the emoji train; I definitely take notice when I see them being used on Twitter since it is still “new” and not everyone is taking advantage of it. And I’m all about leveraging what is needed to make something get seen.

Looking for emojis? Emojibase has quite a few to choose from.

Now before I run off and create my new Twitter bio, let’s see if we can dig ups some really awesome Twitter bio ideas for some inspiration.

Here’s some of the cool Twitter bios I have come across: 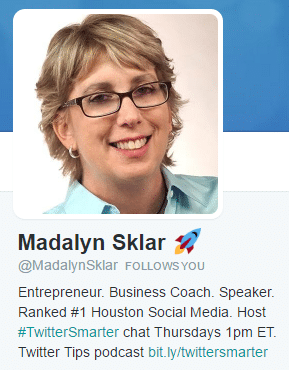 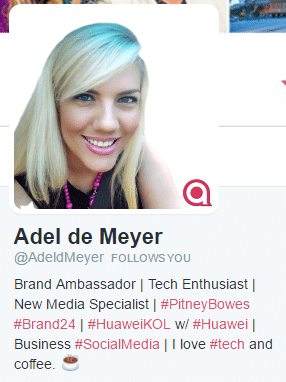 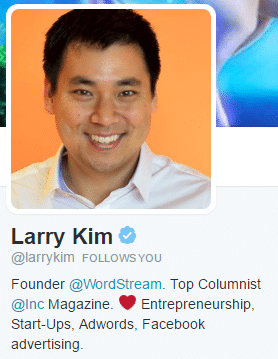 A few takeaways from looking at not only these bios, but others:

What You Shouldn’t Have in Your Bio for Twitter

While I have seen many things done right for Twitter bios, I have also seen quite a few things you shouldn’t have in your bio.

The first thing you shouldn’t have is nothing but hashtags. This isn’t Instagram where you can cram in 30 hashtags and be ok. It comes across a bit spammy in my opinion.

So, should you decide to use hashtags its best to limit their use and not over do it. For example, this profile has nothing but hashtags. 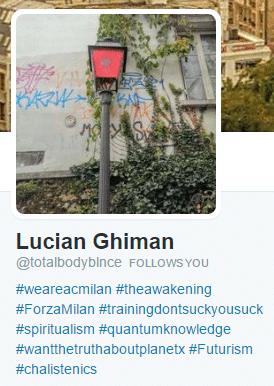 And perhaps the worst part of it is that a handful of those hashtags no one is ever going to search for. So what good does it do to use them?

Another thing you don’t want to include in your Twitter bio is that you are a guru, ninja, rockstar, or wizard. Of course, unless you are really one of those things. But 99% of the time you are not. So don’t pretend.

This profile definitely hits on a couple of those “don’ts”… 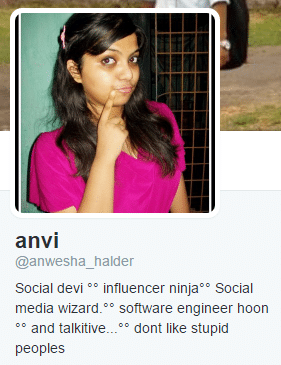 And if you are claiming to be something this extraordinary, you better be able to prove it.

One final thought about what not to include. Don’t include “nothing”.

What I mean is that you shouldn’t have an empty Twitter bio.

Without your bio filled out, how will people learn anything about you?

They won’t. And more than likely they will bounce from your profile and move on to others who they can relate to.

You’ve probably just learned more about Twitter bios than you ever wanted to. But you know what?

You need the ins and outs of what it takes to create the best Twitter bio that you can.

So here’s what I have come up with based on my research and analysis of what you need (or don’t) for an awesome Twitter bio.

I’ve attempted incorporate all the items that I mentioned were important to cover:

If you refer to my previous bio, I already had most of these elements already. It just needed to be updated with some new items.

And here it is: 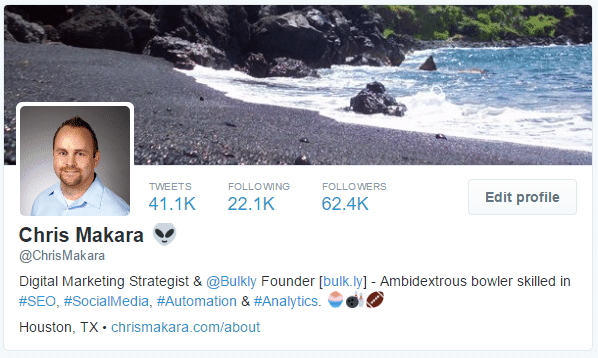 You’ll notice I dropped the “Interactive Marketing” text and just focused on using “Digital Marketing Strategist” instead. I’ve worked in the Twitter handle for Bulkly as well as dropped in the URL to it.

I wanted to keep the “Ambidextrous bowler” text in that it has been a great conversation starter.

From there, I move into 4 of my core skill sets and round it all off with some emojis.

The first is for “Shave Ice” – and no, it’s not the same thing as a “snow-cone”. Trust me, they are much more awesome. If you are ever in Oahu, my go-to is Matsumoto’s.

The second emoji is to reiterate the bowling background I have and the last is because I watch a TON of football.

Oh, and I added an alien emoji next to my name…well, because you know: 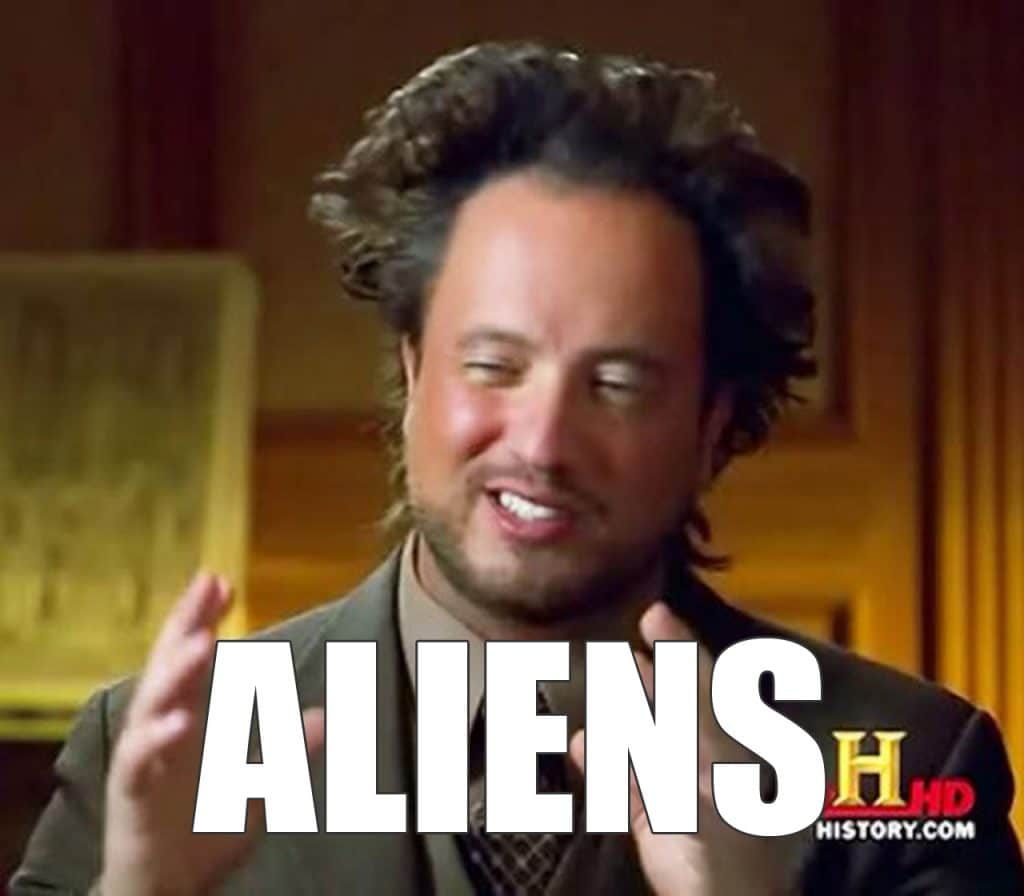 Thoughts on how my new Twitter bio compares to my previous one?

Look, maybe you have already crushed it with a really clever Twitter bio that can’t possibly be any better. Perhaps, you even have “rockstar” or “guru” status proudly displayed in your bio. Congrats!

For the rest of us, it doesn’t hurt to take a few minutes and evaluate what our Twitter bio says and does it accomplish the goals we want it to.

As with anything in the digital marketing world, you should always be testing and looking to make improvements on what you are doing.

Compounded incremental improvements of your goals can lead to stellar results.

So it doesn’t hurt to tweak or take a different approach with your Twitter bio to see if it helps to move the needle for you.

Have you ever really gave much thought about what to put into it?

Drop me a line in the comments to let me know how you are using your Twitter bio to your advantage.

Start your free, 7-day trial by clicking the button below.