How does the “Hashtags” option work?

A pro-tip for hashtags in Bulkly is that you can actually create groups of hashtags for each social media channel. And when it comes time to send an update to that channel, Bulkly will randomly pick a hashtag to use from the hashtags you have added. 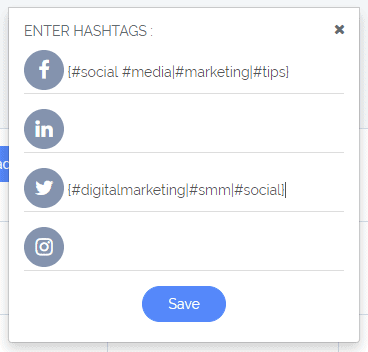 For example, in the image above you can see that the format to enter multiple hashtags is as follows:

Notice the brackets encasing all hashtags, with each hashtag separated by a pipe “|” symbol.

If you only want to use a single hashtag on each channel, there is no need to use the brackets or pipe symbol.

What are your Feelings

Start your Free, 7-day trial by clicking the button below.

This website uses cookies to improve your experience while you navigate through the website. Out of these, the cookies that are categorized as necessary are stored on your browser as they are essential for the working of basic functionalities of the website. We also use third-party cookies that help us analyze and understand how you use this website. These cookies will be stored in your browser only with your consent. You also have the option to opt-out of these cookies. But opting out of some of these cookies may affect your browsing experience.
Necessary Always Enabled

Any cookies that may not be particularly necessary for the website to function and is used specifically to collect user personal data via analytics, ads, other embedded contents are termed as non-necessary cookies. It is mandatory to procure user consent prior to running these cookies on your website.